Walt Frazier’s off-court elegance set PUMA’s benchmark to provide the first signature basketball model that would match the New York Knicks legend’s finesse while on the hardwood. Unsurprisingly, PUMA ended up crafting an off-court icon as well.The PUMA Clydes today are now made in leather, as the PUMA Suede has its own identity. The Clyde was the main source of inspiration when PUMA Basketball returned to introduce new hoops shoes - most of them sporting heritage visuals to honor the legacy of Walt “Clyde” Frazier.

Take a look at the model’s humble beginnings and see its “revised” journey before it proudly ended up having the Clyde and Suede namesake as the brand’s most legendary silhouettes. View some of the most expensive PUMA Clydes in the aftermarket and the collabs that were highly sought after during its release.

A few years before the PUMA Clyde was officially unveiled to the public, all of PUMA’s shoes were mainly track shoes and trainers. Most of which didn't really translate well as a fashionable lifestyle sneaker. Can’t really blame the brand, it was the late 60s, and they prioritized performance rather than style. The Air Jordans and Adidas Yeezys that people have in the current time period wasn’t actually in anyone’s mind back then.

Eventually, PUMA entered the lifestyle market when they brought out the PUMA Crack - just in time for the 1968 Olympics in Mexico. It was a low-cut shoe that featured suede and PUMA’s formstrip logo on the lateral side. The formstrip placement was meant to add lateral stability and provide minimal support. The “Crack” was actually the shoe’s first name, contrary to what people thought to be the Suede. It was renamed to Suede when PUMA didn’t have an international trademark for the label “Clyde”.

A year later, in 1969, PUMA’s brotherly rival Adidas, was on the rise in basketball footwear when the Three Stripes launched the legendary Adidas Superstar. The Superstars replaced more than half of the basketball shoes worn in the NBA during that era - the likes of Converse All Stars, Pro Keds, and Converse Weapons took a back seat as the Superstar reached for the throne.

That didn’t stop PUMA from eventually finding their own basketball star that would build an unforgettable legacy in both basketball and fashion. Walt “Clyde” Frazier was one of the NBA’s biggest stars, not only did he showcase his on-court grace, but he also had an off-court flair which made him one of the most fashionable players in history. Wondering where he got the nickname Clyde? It was because he wore a similar fedora hat worn by the character Clyde Barrow in the movie Bonnie and Clyde in 1967.

PUMA was interested in Clyde’s overall personality, so they signed him to an endorsement deal in 1972. PUMA actually had an existing basketball shoe, the PUMA Basket. But it’s made with leather and is heavier than what Frazier preferred, so he gave PUMA his ideas.

The brand eventually redesigned the PUMA “CRACK” silhouette and put Clyde’s name below the PUMA label on the shoe, making him the first athlete to get his own signature shoe.

For those who are confused, the Clyde was first known as the Crack. Then it’s called PUMA Clyde, and then it transitioned into PUMA Suede when they had to sell the shoe abroad.

It was even called the PUMA States in the UK, because the country didn’t find the term Suede appropriate.

Read more about the trivial history of the PUMA Clyde here: https://about.puma.com/en/this-is-puma/archive-stories/history-of-suede 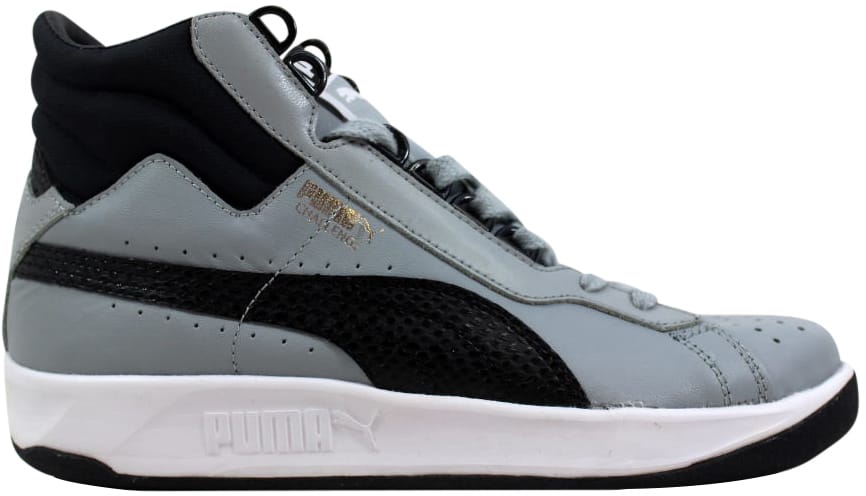 The shoe had a massive fanbase in New York, the team where the two-time NBA Champion built his impressive career over a ten-year campaign from 1967 to 1977 until he was shockingly traded to the Cleveland Cavaliers.

His impact on the team and the culture in New York resulted in a loyal wave of fans that wore the PUMA Suede when hip-hop and skateboard started to trend in the mainstream culture. The soft and comfortable suede upper that released in bright and flashy colorways proved to be a go-to option for people who weren’t confined to buying from top major brands like Adidas, Reebok, and Nike, among many others.

As the years went by, the PUMA Clyde and Suede continued to appear every now and then in various retail stores. Some colorways even staying off the usual suede upper and utilizing various upper fabrics like leather, canvas, and even snakeskin for a more premium feel. It became an ideal lifestyle shoe for PUMA fans and even non-sneakerheads seeking an everyday sneaker that’s comfortable. It can even be considered to be an all-around shoe for everybody - just like Nike’s Air Force 1 Low.

Back to the Hardwood

In 2018, the PUMA Crack turned Clyde turned Suede celebrated its 50th anniversary. The Semicentennial lifespan of the shoe didn’t mean that it would end there. It was actually just getting started. PUMA returned to creating basketball shoes after more than 20 years of hoops absence. One of the pioneers of basketball shoes is back.

The big step started with the signing of Jay-Z as PUMA Basketball’s Creative Director. Various NBA players were also given endorsement deals, the NBA players include some of the 2018 NBA Draft Class such as Deandre Ayton, Marvin Bagley, and Zhaire Smith. The endorsement also featured WNBA star Skylar Diggins-Smith.

The first basketball shoe unveiled was the PUMA Clyde Court Disrupt. The shoe featured a sock-like knit upper that is lightweight and breathable - important aspects in a basketball shoe especially in today’s level of play. The leather formstrip logo on the lateral side pays tribute to the OG PUMA Clyde that was launched in 1973.

The midsole features a combination of PUMA’s proprietary foam IGNITE and one of their latest cushioning systems, the NRGY beads. Both of which are encased within a thick rubber cupsole that runs until the outsole. The traction features tightly-spaced triangular nubs that run full-length for consistent grip.

The brand’s first attempt to return to the hoops shoe spotlight intrigued a lot of basketball shoe reviewers, they were delighted with the shoe’s performance despite its lacking qualities - specifically the minimal cushioning due to the thick midsole, and the insufficient lateral stability - caused by the soft knitted upper. PUMA Basketball has been out of the game for more than 20 years, and it returned, quickly looking to challenge the top basketball shoe brands like Nike, Adidas, Jordan Brand, and Under Armour.

About a few months later since the Clyde Court Disrupt’s debut and in early 2019, the second hoops shoe model from the brand has released. The PUMA Uproar was a rather futuristic shoe that took its design inspiration from other PUMA basketball shoes. One of NBA’s star big men DeMarcus Cousins was the first to introduce the shoe to the public.

As the PUMA Suede lived a life of its own as a staple lifestyle sneaker among the masses, the brand’s basketball shoes continued to release more models that sparked basketball enthusiast’s curiosity. In 2019, another Clyde-inspired hoops shoe was unveiled - this time looking closer to the original silhouette than ever.

The heritage aesthetics of the shoe is the most noticeable feature of the Clyde Court Hardwood. The unveiling in Madison Square Garden featured Clyde himself together with up-and-coming NBA players RJ Barrett and Kevin Knox.

Sporting a low-top construction, the Clyde Court Hardwood blends a mix of old and modern as the mesh upper is layered with tumbled leather on the midfoot to the rear and suede accents on the lateral side piece and the heel.

The launch colorways arrived in all-white uppers with formstrip and heel clip accents of Black, Green, and Black. The model sold for $120 and was seen on the feet of several PUMA-sponsored NBA players.

Aside from Jay-Z being the brand’s Creative Director for basketball, PUMA also signed J. Cole to a multi-year deal as brand ambassador. It led to more fruitful basketball shoes as the latter currently have two signature basketball sneakers, the PUMA RS Dreamer 1 and 2.

In late 2020, the PUMA Clyde released in an all-new PUMA Clyde All-Pro. It was another modern low-top version of the PUMA Clyde that featured a Matryx knit fabric with linear hits all over the upper. A heritage formstrip is placed on the lateral side of the shoe. The upgraded PROFOAM+ midsole provided better all-around cushioning than the past models, making it a go-to option for some NBA players.

The traction featured a multi-directional criss-cross pattern that gripped both indoor and outdoor courts.

The shoe retailed for $130 and released in various bright colorways.

As PUMA Basketball continues to unveil new products throughout the season, some basketball fans are starting to pay attention to what the brand has to offer. The price point of most of their basketball kicks is quite reasonable and pretty affordable compared to other brands that sometimes go over $150.

With more NBA players being tapped by PUMA, it’s not long until the brand will eventually overtake at least one of the current top brands in the basketball shoe market.

PUMA Clydes aren’t as hyped as some of the most limited sneakers from Air Jordan and Adidas. But there are still select PUMA Clydes that are worth getting mentioned after a surprising resale price in the recent years.

The PUMA Clyde version of one of the most beloved wrestlers in history, the Undertake Black colorway actually took a plunge as its retail price of $500 ended up going for as low as $125.

But in a recent resell transaction on a reselling site, a pair sold for $850. Quite a lucky break for whoever sold the sneaker.

Part of Jeff Staple’s Made in Japan pack that was released in 2013, the PUMA Clyde Staple Pigeon colorway was the most expensive among its fellow Clyde silhouettes. It featured iconic hints of the Staple Pigeon brand - specifically the suede grey, dark grey, and white upper materials. And of course, the legendary pigeon logo is placed on the rear, probably trying to dodge the puma symbol on the midfoot.